Dresden/Sofia, 1st July 2020 – The Offerista Group has renamed its Southern European sister company Prospecto. As of now, the company operates as Offerista Group Bulgaria/Hungary/Romania in Bulgaria, Hungary and Romania. In doing so, the business group now has a unified image for its B2B customers.

Offerista is a shopper marketing network far beyond the borders of Germany. Prospecto Group, with its head office in Sofia, is a provider of Drive2Store solutions with over 100 retail customers in 16 Central and Eastern European countries, and more than 30 employees at the Sofia, Budapest, and Bucharest sites. Following the renaming, the Southern European subsidiary will also be run by CEO Oggy Popov. B2C brands, however, remain unaffected. Consumers in Southern Europe can continue using the company group’s apps under the usual names: Broshura.bg, Ofertolino.ro and Prospecto.hu.

“Following successful expansion at the beginning of the year, I’m all the more delighted that the Offerista name, with all its values and strengths, will also now be positioned in communication within our new Bulgarian, Hungarian and Romanian markets. Together, we’re combining our strengths as a global shopper marketing network”, says Benjamin Thym, Managing Director of Offerista Group.

“Being united in the marketplace as Offerista Group above all symbolises the enormous power and scope that our business group offers retail and manufacturing brands in all sectors internationally”, Oggy Popov, CEO Offerista Group Bulgaria/Hungary/Romania.

Offerista Group merged with Prospecto Group at the beginning of 2020. Customers of Offerista and Prospecto have since profited from diverse offers in the Cross-Channel-Mix customised to individual needs and requirements in a total of eight locations in six countries.

As a shopper marketing network, Offerista Group GmbH offers tailored digital solutions for the location-based marketing of offers and branches. Offerista implements cross-channel campaigns to ensure that advertising messages are transported across a wide range of user-relevant channels. We make consumers so curious about products that they go to the shops and buy them. With a team of more than 120 employees throughout Europe, Offerista provides cross-channel support for retailer and manufacturer brands across all industries at every point in the customer journey. In addition to its headquarters in Dresden, it has further sites in Berlin, Essen, Vienna, Sofia, Budapest and Bucharest. The managing directors are Tobias Bräuer and Benjamin Thym. 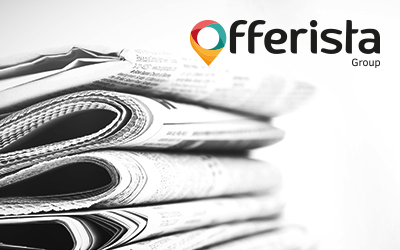